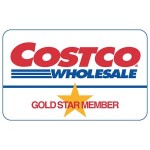 This might sound like a Promotional Ad for Costco, but it’s not. The only reason I want to write this piece is because I was discussing it with my cousin the other day whether it’s worth signing up for a Costco Membership or not.

Before I give my answer let me say that if you live around a Costco warehouse that also has a gas station then it is a no-brainer, and that not getting the membership would literally be stupid. Why? Because Costco gas is about 15-20 cents cheaper than the rest of the gas stations out there (well, except Arco, but I’m going to leave Arco out of the competition because Arco does not accept Credit Card, which could potentially turn in to Reward Points and cashback, and most importantly it is very very inconvenient to pay with cash).

Now Having said that Costco gas is 15-20 cents cheap translates to a lot of savings. Let’s calculate this…

I’m sure everybody knows how much a costco membership is. It’s $50 for a year. Well, if you don’t use any of their services, and if you don’t buy anything from them just the savings from filling up your gas there will pay for the $50 membership fee.

This calculation was done based on the fact that your car’s gas tank is 17 gallons. If you have a larger tank then the savings would be even greater. Also I assumed that you fill up twice a month, but average commuter fills up once a week or 3 times a month, at least here in Southern California.

Now, if your local Costco does not have a gas station, then it’s your call, but that store has so much to offer I still think it’s a good deal. Just the photo services alone make it worth while. Yes, they make you buy things in bulk, but those are things that you use anyways, and if you are a big family, maybe you buy thing in bulk anyways, so why not save on them.

To summarize it, yes get the Costco membership, I think it’s worth it, but your Costco has a gas station too, then YOU MUST GET IT, IT WOULD BE INSANE NOT TO GET IT.