Cooling Down Your Intel i7 2600K CPU
I was never big on Overclocking the CPU, simply because it was not worth the compromise. I didn’t think 10-15% performance increase is worth losing the stability of your system.

But Intel’s new P67 chipset along with i7 2600K CPU make it worthwhile simply because there are no compromises. Both the CPU and the Motherboard (Fatal1ty P67 Performance) were designed from ground up to be overclocked. In fact it would be stupid to not Overclock the system. 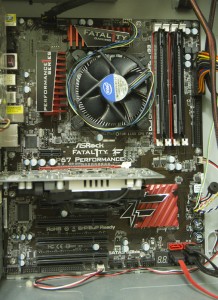 The amount of gain in performance is a bit subjective, and is a topic of its own, but regardless; if you got nothing to lose why not do it.

By the way, CPU originally was set to 3.4GHz, and I bumped it up to 4.8GHz without any – and I mean absolutely any lockups, crashes or any issues.

Here you can see the difference between the original CPU Fan and the aftermarket one made by CoolMaster which happens to be a very reputable brand in the market. This think cost me $38, which is not a bad deal. In fact it was a “Most Bang for the Buck” in my opinion. 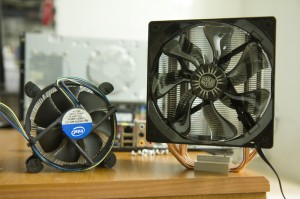 Here is the rear view: 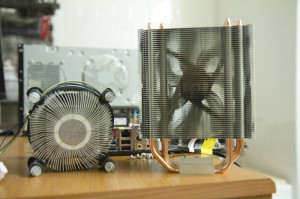 Now my CPU is way cooler than before. Now with this new CPU Cooler I’m thinking of going a bit further with the overclocking. I think I can bump it up to 5GHz. Online forums say that people successfully overclock i7 2600K to 5.2GHz. But I doubt that this new CPU Fan could handle 5.2GHz. I think I need one of those really expensive ones or even a Water Cooling system which go as high as $150 to $200. I’ll think about it.