Many people get fooled at the local drug store when they are buying over-the-counter medicine.  A good example of this would be Tylenol.  I constantly get into arguments with friends and relatives about this subject, but there are people who refuse to believe that the Generic Version of Tylenol – a drug called Acetaminophen – is the same things as Tylenol. 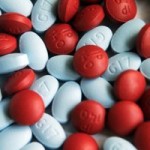 Common belief is that something cheaper must be less effective, but that is not true.  It’s the same.

Here are some of the Generic Brands of Acetaminophen out there: Walmart has its Equate brand for all the generic medicine, Costco has Kirkland, and the rest such as Target, Kmart, RiteAid, CVS and Walgreens just have their Logo and the word Acetaminophen on the box.

Now the same goes for Advil or Motrin. Any time you see Advil or Motrin, just look to the right  and you’ll see the Generic version called Ibuprofen. Both Advil and Motrin compete to make people think that their drug is more effective than the other, but both companies are lying. Be smart about it; save yourself some money and get the Ibuprofen.

I talked about Tylenol, Advil and Motrin, but the same is true for Excedrin, TheraFlu, Robitussin, Benadryl and the rest of the popular over-the-counter stuff you can find at your local pharmacy.

Active Ingredients: This the key to really understand what’s going on. It doesn’t matter what the commercials say, or what the ads claim, it’s the Active Ingredient what matters. Check for your self. Flip the box around and ready what’s in your Medicine. If the active ingredients are the same then they are the SAME. Excedrin for example is a little bit of Tylenol, a little bit of Aspirin, and Coffee. That’s it.

This is not a medical opinion or a scientific result, but if you were to take a Tylenol, some Aspirin, and drunk a cup of coffee you should get the same result as Excedrin. Now, I’m not suggesting you to start doing that because the dosages are completely different, but the physical medicine that goes into your system are the same.